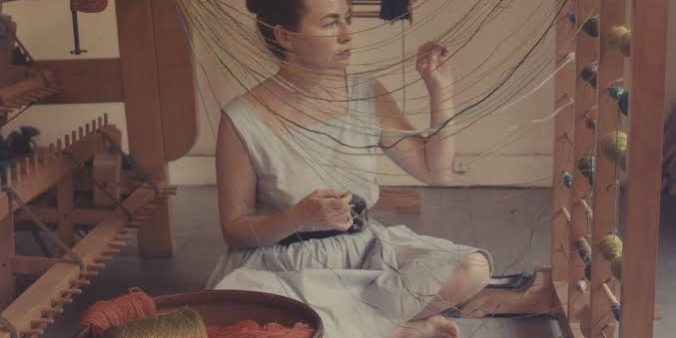 A major figure in the fiber movement of the 1950s and 1960s, Lenore Tawney redefined the possibilities of weaving and led the way toward the explosive growth of fiber art in subsequent decades. She created a new vocabulary for textile works by subverting the typical woven grid and inventing new ways of weaving beyond the traditional boundaries of the loom. In order to emphasize the sculptural qualities of her works, Tawney maintained that they hang in space rather than against the wall.
Born in Lorain, Ohio, in 1907, Tawney moved to Chicago at the age of twenty and supported herself by working as a proofreader for a legal publishing company. After 15 of years living and working in the city, she began taking classes at the Art Institute as well as Chicago’s Institute of Design (formerly the New Bauhaus). At the ID, Tawney studied sculpture with Alexander Archipenko and weaving with Marli Ehrman, an alumna of the innovative weaving workshop at the Bauhaus school of art in Germany. Tawney bought her first loom when she was 41 and devoted herself wholly to weaving at the age of 47.

Tawney remained a permanent pilgrim all her life, travelling the world until she was almost 90 years old. She died in 2007 in her New York loft at the age of 100.

Her art is held in important museum collections including LACMA, the Menil Collection, the Metropolitan Museum of Art, the MoMA, the Philadelphia Museum of Art, the Whitney Museum of American Art, and Tate Modern. Her estate has been represented by Alison Jacques Gallery since 2018. In 2019, a major museum survey, “Lenore Tawney: Mirror of the Universe,” was held at the John Michael Kohler Arts Center in Wisconsin. Key elements of Tawney’s exceptional studio environment are on permanent display here.

Lenore Tawney established the Lenore G. Tawney Foundation in 1989, with the aim to support the visual arts with a focus on craft media, and in particular, to support emerging artists.