The History of Colors in Quilting 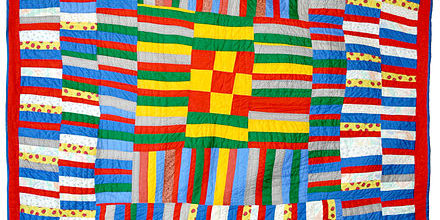 Quilting And Colors In North America

In Colonial America, quilts were largely whole-cloth. Whole-cloth quilts were a single piece of fabric that were held together with needlework. During this time, there was a popular technique known as Broderie perse. These pierced quilts employed very simple colors to create a design on the fabric. Some common colors found in these early quits include tans, browns, and other earth tones. As new types of material became available and quilters learned how to work with more sophisticated techniques, designs became more elaborate.

In terms of colors, African Americans produced a wide variety of beautiful quilts. In some ways, these quilts helped set the seeds for improvisational quilting with a rich array of colors. An example of some of the beautiful quilts produced is the Star of Bethlehem found in the Brooklyn Museum. This quilt features many different shades of blue, purple, pink, and even some green.

The first nationwide recognition of African-American quilt-making came when the Gee’s Bend quilting community was celebrated in an exhibition that opened in 2002 and traveled to many museums. Gee’s Bend is a small, isolated community of African-Americans in southern Alabama with a quilt-making tradition that goes back several generations and is characterized by pattern improvisation, multiple patterning, bright and contrasting colors, visual motion, and a lack of rules.

A 1979 quilt by Lucy Mingo of Gee’s Bend, Alabama. It includes a nine-patch center block surrounded by pieced strips.

Amish quilting is another eloquent quilt form. Amish quilts are unique because they only use solid fabrics pieced together from geometric shapes. Amish quilting is typically done on a dark background of black, blue, purple, and other dark colors and utilizes a mix of splashes with bright solid color.

In the early 21st century, modern quilting became a more prominent area of quilting. Modern quilting follows a distinct aesthetic style which draws on inspiration from modern style in architecture, art, and design using traditional quilt making techniques.Modern quilts are different from art quilts in that they are made to be used. Modern quilts are also influenced by the Quilters of Gee’s Bend, Amish quilts, Nancy Crow, Denyse Schmidt, Gwen Marston, Yoshiko Jinzenji, Bill Kerr and Weeks Ringle.

The Modern Quilt Guild has attempted to define modern quilting. The characteristics of a modern quilt may include: the use of bold colors and prints, high contrast and graphic areas of solid color, improvisational piecing, minimalism, expansive negative space, and alternate grid work.

In many of the quilting techniques explored in our courses, you will see the use of bold colors and prints, high contrast colors, and a special emphasis on using shapes, curves and color value